I walked towards a small thicket of hemlocks obscuring the stump of the tree we were playing on. I had been so intent on getting through the hemlock thicket near the stump, I did not notice the grove of giant pine trees the snag had originated from. The largest island pine trees stood over one hundred-twenty feet tall, spanned between ten and twelve feet in circumference, and were free of branches or live limbs for eighty feet or more. The openness of the enclosed outdoor space beneath the crowns of

The ground was covered with a six-inch-thick thatch of old pine and hemlock needles that felt soft and strangely lofty under bare feet. The tall trees and thick, soft, ground cover combined to buffer the area from outside sound. My cousins and I began speaking in hushed tones and were nearly whispering after a few minutes of exploring the area.

Snow was dependably abundant most winters. After more than 250 years of sustained agriculture, a high proportion of our local countryside was not forested in the 1950s. With few trees and limited ground cover, winter winds often howled across the hayfields and pastures with great intensity. Hard-packed drifts filled every available dip and low spot with up to ten feet of snow, creating ideal conditions for numerous tunnels, complex snow forts, and endless snowball fights.

The sweet smell of maple sap steam flowing from the open door of a sugar house is one of my earliest childhood memories.

I stood silently as the bear reared up on his hind legs and faced me, less than ten feet away. I took a huge breath, threw back my shoulders, and stretched to make myself look as large and imposing as possible. The bear stood as tall as me. For several seconds we stood motionless, staring at each other until I suddenly let out a loud screeching “Hoot!” The bear panicked at the noise and disappeared into the brush faster than I could have fallen off the log. Victorious, I grinned like a Cheshire cat as I listened to the bear crash through the woods and disappear into the distance. I hesitated for a while to make sure he wasn’t coming back before I continued with my job.

On the coldest and snowiest days, the length of our lunch “hour” respite lasted just a few minutes longer than our supply of combustible material. With the fire successfully established, heat radiating from the blaze started to melt the snow, and our fire sank deeper our entire lunch hour. When the snow was exceptionally deep and the air was calm, we had a difficult time keeping the fire burning. The base of the fire subsided so far beneath the surface of the surrounding snow, carbon dioxide would accumulate in the hole and smother the fire

November brought the most unique and enjoyable work weather. Each morning, I waited on the roadside in fog and unending drizzle punctuated by light rain, fully expecting similar weather at the job site two-and-a-half hours away. An hour from town, we climbed in elevation and at about 3,000 feet the drizzle stopped, the fog cleared, and we emerged into brilliant sunshine and cloudless blue skies. We climbed more, and our view widened, more spectacular. Mountaintops came into view like islands in a sea of clouds. Our worksite was much higher in elevation and miles from the near edge of the cloudbank. 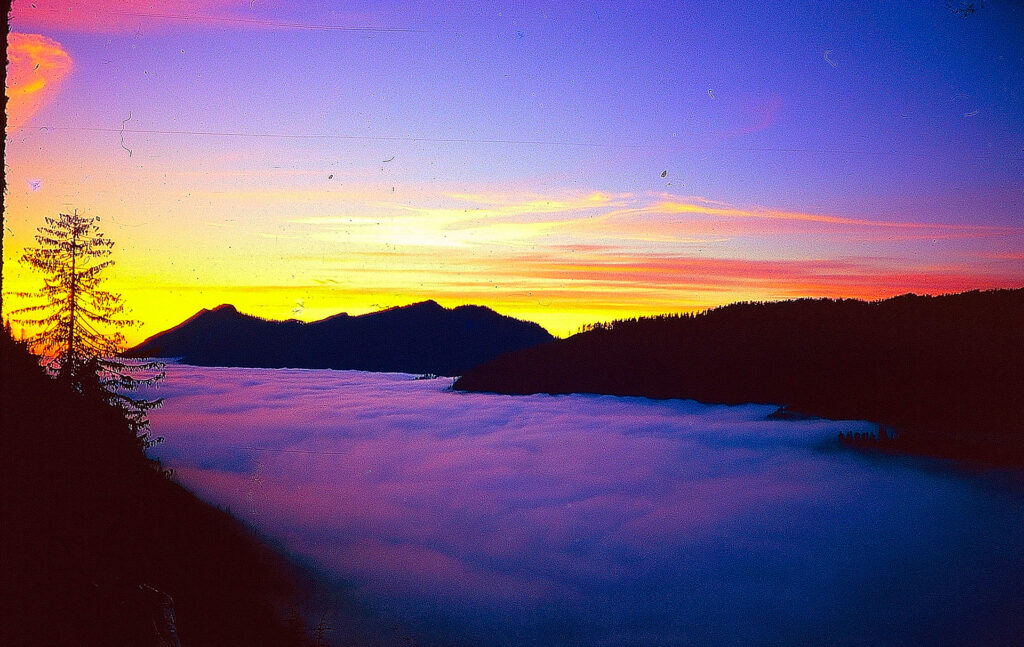